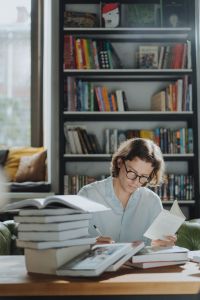 “Literature has an important role in human culture. Broadly interpreted, literature is defined as all cultural artefacts that make use of literary devices, such as narrativity, metaphoricity, symbolism. Its manifestations include novels, short stories, poetry, theatre, film, television, and, more recently, digital forms such as hypertext storytelling. Scientific Study of Literature (SSOL) publishes empirical studies that apply scientific stringency to cast light on the structure and function of literary phenomena.

Now available to the University of Cambridge electronically from volume 10 (2020) to present.

Access the Scientific Study of Literature via the ejournals@cambridge A-Z or at this link.

Photo by cottonbro from Pexels