Trial access is now enabled up to 30 November 2019 for the following disciplines from Oxford Research Encyclopaedias:

“Semitica et Classica,  International Journal of Oriental and Mediterranean Studies, led by specialists in Eastern Mediterranean studies, philologists, archaeologists, epigraphists, philosophers, historians and linguists is directed to researchers with a particular interest in these areas of learning. The journal publishes work related to the interaction between the classical and Oriental worlds from the second millennium B.C.E. to the early centuries of Islam. The cultural area covered by the journal stretches from the western Mediterranean to the Middle East and includes Europe, Africa, and Asia up to and including the Arabian peninsula.”

Now available to the University of Cambridge electronically from volume 1 (2008) to present.

Access Semitica et Classica via the ejournals@cambridge A-Z or at this link.

“Syllecta Classica is an annual publication of the Department of Classics at the University of Iowa. We specialize in publishing long, substantial articles on Classical Greek and Roman literature, history, and culture, including their modern reception. We have excellent facilities for reproducing maps, plans, and illustrations.”

Now available to the University of Cambridge electronically from volume 1 (1989) to present.

Access Syllecta Classica via the ejournals@cambridge A-Z or at this link.

“Illinois Classical Studies was founded in 1976 by Miroslav Marcovich, Head of the Department of the Classics at the University of Illinois… ICS publishes original research on a variety of topics related to the Classics, in all areas of Classical Philology and its ancillary disciplines, such as Greek and Latin literature, history, archaeology, epigraphy, papyrology, patristics, the history of Classical scholarship, the reception of Classics in the Middle Ages, the Renaissance and beyond. ICS also publishes thematic volumes.”

Now available to the University of Cambridge electronically from volume 1 (1976) to present.

Access Illinois Classical Studies via the ejournals@cambridge A-Z or at this link.

Access is now available via this link to the archive of the journal Ramus published by Cambridge University Press. From the editorial of Ramus, 25: “Ramus was born from these passages and has come of age”: 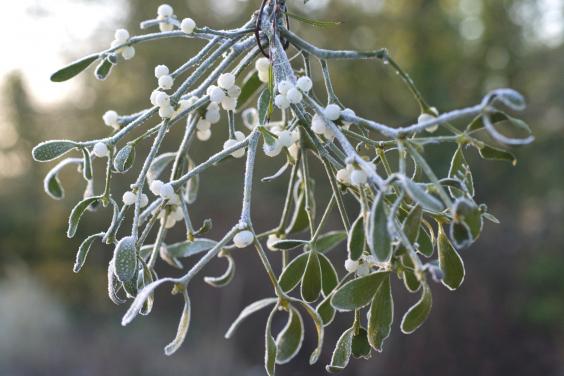 For the importance of the major works of classical literature is not confined to
classicists. In respect of both the significance of the issues with which they deal
and the complexity of the exploration of those issues of which they consist, the
quality of these major works is such that the understanding of them not only
brings with it the intellectual satisfaction common to achievement in all
academic disciplines but, since it increases one’s comprehension of issues
fundamental to oneself as a thinking, sentient human person, contributes
towards, and is a constituent of, the richness of one’s own experience. As the
‘humanity’ par excellence, Greek and Roman literature define what it is to be
human – Ramus, Editorial v. 1, issue 1.

Access is now available to the new, updating edition 5 of the Oxford Classical Dictionary.

In print since 1949, the Oxford Classical Dictionary (OCD) has grown from almost 160 to 6,500 entries on a wide range of topics, and has been an unrivaled single-source reference for the study of the Greco-Roman world.  With its accessible, concise entries, the OCD has long-served as a student’s introduction to richer study, as well as a trusted guide for scholars seeking a ready reference.

In planning now for a fifth edition, the OCD confronts not only the familiar challenge of keeping abreast of progress in our dynamic, multi-faceted field, but must engage with a new challenge as well. Where past generations with questions to ask habitually sought out the OCD on its shelf, an ever-growing number of potential users now reach first for one or another digital device and may often content themselves with whatever answers pop up on its screen. That trend away from the stability of print is but one sign of a significant shift in the rhythm and style of academic life. Ours is no longer the world our teachers and our teachers’ teachers knew, and there is no going back, no turning a blind eye, no recourse to half measures in the face of that change. To meet the demands of tomorrow, the OCD must today rethink the very role of a reference tool in this new digital environment. The result of that scrutiny is turning out, happily enough, to be a tremendous opportunity, well in tune with our core values. The field of Classical Studies has never itself been purely text-based: why should its devotees be restricted to research tools that are any more confined to text?

… The collapse of space restrictions will allow for richer and more detailed discussions than before, even as the capabilities of hypertext will enable readers to expand or collapse those discussions to suit their individual interests and abilities. Adding and emending text, however, is not the only change in store: a digital environment promises enrichment far beyond the capabilities of the traditional book. Entries will now be able to integrate maps, images, diagrams, sound clips, and whatever other resources not only clarify issues, but may themselves become substantive elements of the discussion. With the resources of Oxford Scholarship Online at its disposal, OCD5 will also be able to link its entries directly to ancient texts and secondary works, becoming not just a reference tool in its own right but a point of access to a much richer panoply of resources.

Visit the article in full.

“Early exploration of the Black Sea is reflected in the Argonaut story, which, although placed in the generation after the Trojan War, reflects much earlier material (the unusual properties of the Argo go back to an era when seamanship seemed more magic than craft). The Argonauts reached the mouth of the Phasis river (modern Rioni) at the southeastern corner of the Black Sea, and the quest for the Golden Fleece may represent early attempts to profit from the wealth of the remote region of Colchis.”-from the new article on exploration

Cambridge has long enjoyed access to the New Pauly, “the unrivalled modern reference work for the ancient world” published by Brill, but readers have only been able to consult its supplements in print.  Now both the work and its supplements are available online.

Taking a variety of approaches, each volume provides quick access to indepth knowledge on subjects from chronological lists of rulers of the ancient world, a biographical dictionary of classists who have made their mark on scholarship, to an historical atlas and encyclopedia-type works on the reception of myth and classical literature

Hermes (excerpt from The reception of myth and mythology supplement)

The many important depictions of H. by Claude Lorrain, meanwhile, were far removed from such pragmatic political and economic concerns. His series of paintings and drawings adapted Ovidian myth in the tradition of pastoral landscape painting to portray M.’s cattle theft, his deception of his brother Apollo and the treacherous old man Battus observing him as he makes his escape (fig.: [38 figs. 172; 217; 226; 232; 250; 261; 274; 275; 312]). One of the most affecting examples, worthy of mention here, is the Landscape with Apollo and M. (1645, Rome, Galeria Doria-Pamphilii; fig.: [38.fig. 172]). This oil painting in portrait format (55 x 45 cm) shows an Apollo lost in his violin playing, looking leftward out of the frame, while a H. we recognize by his attributes (winged hat, caduceus and winged ankles) carefully and systematically drives off all his brother’s cattle into the background to the right, into the Classicist landscape scenery, in the role of ‘crafty thief’ he had made his own since the Homeric Hymn. This unequal pair of divine brothers also suggests a contrast between the artistic, ‘Apollonian’ vita contemplativa and the alert and wily vita activa of that H. whom the ancients had without difficulty equated with the Roman god of profit. Admittedly, this contrast is smoothed out again in the spirit of the Homeric Hymn in the last picture in the series, from 1678/79 (Landscape with Apollo and M., drawing on blue paper, London, British Museum), in which the brothers already come to their accommodation and present their reciprocal gifts of lyre (to Apollo) and staff (to M.) (fig.: [38. fig. 312]). 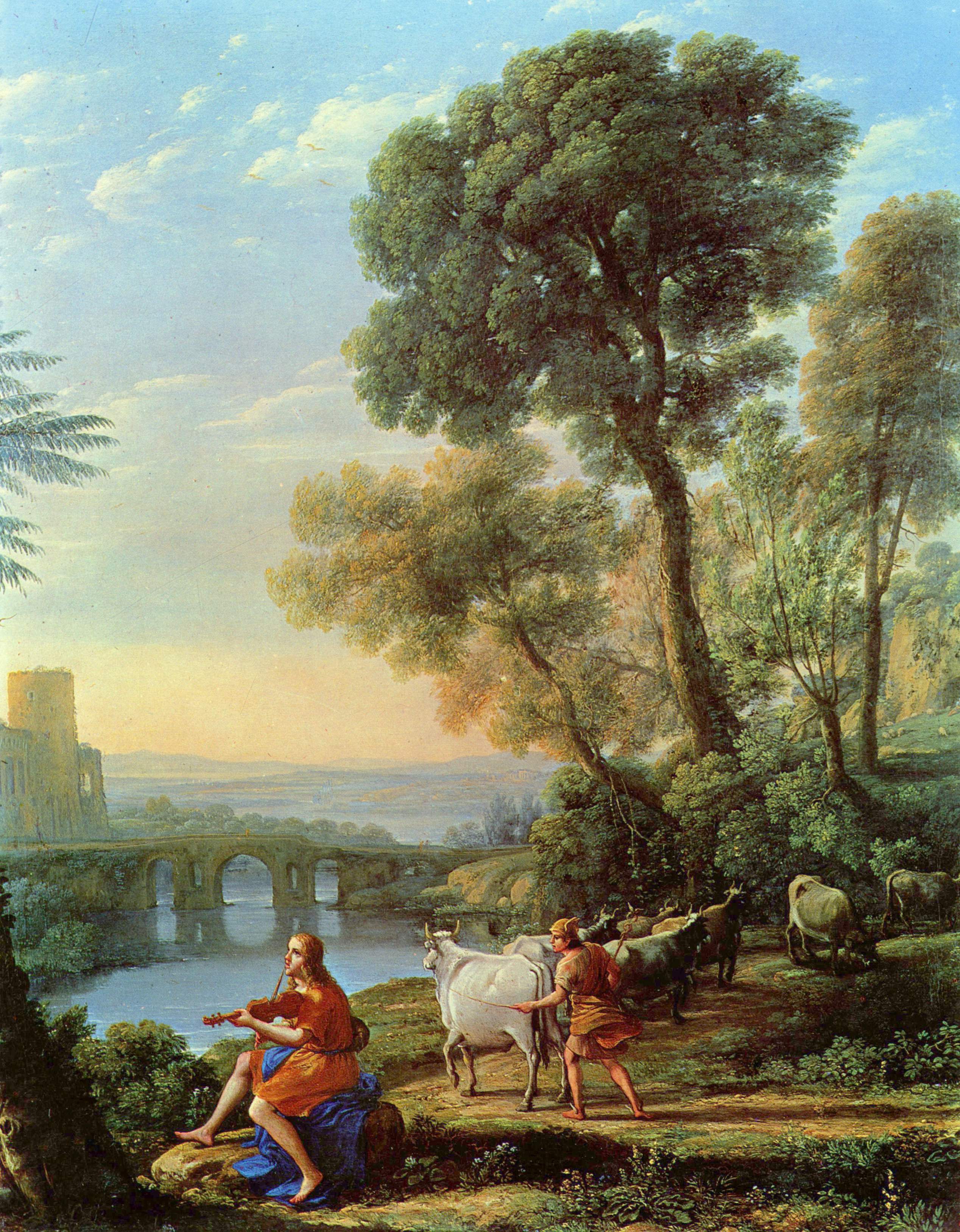