To mark the centenary of Britain’s declaration of war with Germany at the start of the First World War we have put together a list of eresources that are available to members of the University of Cambridge, either via subscription or which are freely available online.

Cambridge University Library recently digitised the war diaries and journals of the poet Siegfried Sassoon and made them freely available online, here.

“…makes available online for the first time 23 of Sassoon’s journals from the years 1915-1927 and 1931-1932, and two poetry notebooks from 1916-1918 containing rough drafts and fair copies of his war poems. Unlike edited printed transcriptions, the digitisations allow the viewer to form a thorough sense of the nature of the physical documents.”

Members of the University of Cambridge can access the Adam Matthew resource The First World War. This resource offers primary source documents on the personal experiences  the men and women affected by the war as well as official documents on recruitment, development and dissemination of propaganda and the Home Front.

The First World War site also offers interactive maps which show how the conflict expanded, a visual archive of bespoke galleries and digitisations of material from the renowned War Reserve Collection from Cambridge University Library.

British Pathe have collated a collection of films from their comprehensive First World War archive. The short films include trench warfare, zeppelins, battleships, U-boats and protests against conscription. Use this link to view the collection.

Maney Online offers free access to a World War One Centenary Collection of 100 articles. The articles, from over 25 humanities journals, are available to access until the end of August.

The British Library is offering a database of over 500 historical sources titled World War One. Material from the Europeana 1914-1918 concerning the origins, outbreak and conclusions of the war, life as a soldier and race, empire and colonial troops are covered, amongst other topics.

These are just some of the eresources available on the First World War. To explore our collection further search for articles via a keyword search on LibrarySearch+ (please check the ‘items with full text online’ box from the list on the left hand side of the results screen).

The Library of Congress has made 13,501 items of sheet music from the First World War freely available to view online.

The World War I Sheet Music collection covers the years 1914 to 1920 (although there is material from as early as 1911), with the majority of material dating from 1917 onwards.

Although some of these songs may have been written in Europe all of the known places of publication are in the United States.

The resource also offers articles and essays under the heading ‘America’s War, as viewed by Publishers and the Public’. These can be viewed here. The essay ‘Major Themes’ discusses George M. Cohan’s quick musical response to the declaration of war:

“George M. Cohan was already a successful Tin Pan Alley songwriter and Broadway composer/producer when, on the day after war was declared, he composed what became America’s iconic WWI song, “Over There”. His earlier work had often displayed patriotic zeal …“Over There’s” bugle call chorus and stirring lyrics rank among his best songs.  The song’s success1 inspired imitations and helped spur the popularity of songs about American involvement turning the tide and winning the war.  It may be difficult (and perhaps unwise) to distinguish these from the general term patriotic songs, but they speak to a particular mindset or objective, that of a confident nation establishing itself in the arena of world powers.”

The Library of Congress Prints & Photographs Division has made available approximately 1900 posters created between 1914 and 1920. The image above is titled ‘Join the young brave throng that goes marching along’ and was published as a recruitment poster in London around 1915.

The World War I Posters website has an online catalogue here.

The majority of the posters were printed in the United States, but the collection also includes material from  Australia, Austria, Belgium, Canada, Germany, Great Britain, Italy, the Netherlands, and Russia are included as well. The posters range in style from anonymous broadsides (predominantly text) to graphically vibrant works by well-known designers. The Library acquired these posters through gift, purchase, and exchange or transfer from other government institutions, and continues to add to the collection.

These collections are freely available to view online. 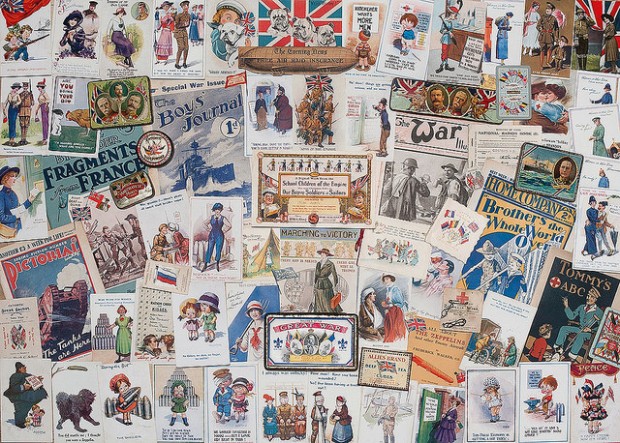 To commemorate 100 years since the outbreak of the First World War, 100 articles from the Maney Publishing online archive are available to download for free in July and August 2014.

Articles are available from over 25 titles, some of which are not usually available electronically to members of the University of Cambridge. The articles cover history, archaeology, literature and culture.

New to eresources@cambirdge: The First World War: Propaganda and Recruitment With events taking place to mark the centenary of the outbreak of the First World War an extension to the Adam Matthew resource The First World War has recently been added to the eresources@cambridge database A-Z.

Focusing on the reality of the daily lives of individuals the database offers a range of primary source material relating to propaganda, recruitment and personnal experiences as well as interactive maps, essays and case studies.

The primary sources include personal diaries, letters, journals, photos, posters and postcards. The digitised images of these documents can be viewed online or downloaded as PDFs.

Material from the renowned War Reserve Collection from Cambridge University Library is included in this resource. This collection includes British, French and German books, periodicals, pamphlets and ephemera relating to the 1914-1919 war.

The collection is described on The First World War site as having:

“… a truly international dimension, covering material from North and South America, the Far East, North Africa, the Middle East, Australasia and Scandinavia, as well as principal European protagonists. A vast array of propaganda material is featured, such as: Allied and German propaganda literature aimed at front-line troops, the home front, businessmen, wives and mothers, politicians and neutral nations (particularly the campaign by the Allies to persuade the United States to enter the war); periodicals and magazines, such as Bull and The Fatherland; reports on French atrocities in Spain and the Belgian atrocities; anti-imperialist tracts aimed at weakening Britain’s Indian and African support; and much more.”

Another resource covering the First World War is Europeana 1914-1918, a free digital resource funded by the EU, which now includes a learning site created by the British LIbrary.

On Monday 17th Februrary The British Library and History Today are hosting The First World War: The Debate.This debate will look at how

the upcoming centenary of the First World War has already sparked great debate and public comment about how we should remember and commemorate the conflict.

The First World War: Propaganda and Recruitment is now available via the eresources@cambridge database A-Z or here.

Trial access is available now until 29 November 2013 to Trench Journals and Unit Magazines of the First World War.

Trench Journals and Unit Magazines of the First World War is an archival research resource containing a vast collection of rare magazines by and for servicemen and women of all nations during the First World War. Over 1,500 periodicals written and illustrated by serving members of the armed forces and associated welfare organizations published between 1914 and the end of 1919 are included. Magazines have been scanned cover-to-cover, in full colour or grey-scale, and with granular indexing of all articles and specialist indexing of publications