Trial access is now arranged to the History of Feminism resource in the Routledge Historical Resources series.

Access is available from today until 30 April 2019 via the following link:

Please send your feedback on this trial via the Eresource Trial Feedback Form here:

History of Feminism is a new online platform that brings together scholarship from Taylor & Francis, its imprints, and its authors.

It is the first part of the new Routledge Historical Resources online programme that will provide both academics and students with a research tool for studying the long Nineteenth Century through thematic collections in areas such as Feminism, the History of Economic Thought, Romanticism and Empire.

This resource covers the subject of feminism over the long nineteenth century (1776–1928). It contains an extensive range of primary and secondary resources, including full books, selected chapters, and journal articles, as well as new thematic essays, and subject introductions.

The London School of Economics has made a collection of campaigning leaflets from the 1975 and 2016 referendums on the UK’s membership of the common market and EU available online. 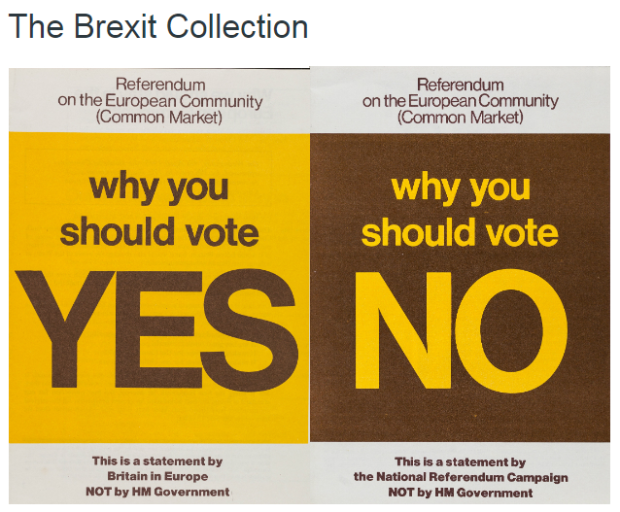 The collection can be browsed by referendum year, affiliation, organisation and subject. There are almost 40 leaflets for the 1975 referendum and over 180 from 2016.

“After Charles de Gaulle famously vetoed the UK’s decision to join the European Communities (EC), the UK finally became a member in 1973. By 1975 the first ever UK-wide referendum took place, where the electorate were asked “Do you think the United Kingdom should stay in the European Community (the common market)?” with 67% of the voting electorate answering “yes” and 33% “no”.”

The collection is part of a wider archive of documents looking at Britain and the European Union.

The images are not copyright free and are made available for research only.

This collection is not available to search in iDiscover and should be accessed on the LSE website.

The BioDiversity Heritage Library publications are now available to search in iDiscover. The collection contains scientific monographs, magazines and journals from around the world providing access to over 55 million pages from the 15th to 21st centuries. The texts are fully searchable and can be downloaded.

“To document Earth’s species and understand the complexities of swiftly-changing ecosystems in the midst of a major extinction crisis and widespread climate change, researchers need something that no single library can provide – access to the world’s collective knowledge about biodiversity. While natural history books and archives contain information that is critical to studying biodiversity, much of this material is available in only a handful of libraries globally. Scientists have long considered this lack of access to biodiversity literature as a major impediment to the efficiency of scientific research.

“BHL operates as a worldwide consortium of natural history, botanical, research, and national libraries working together to address this challenge by digitizing the natural history literature held in their collections and making it freely available for open access as part of a global “biodiversity community.””

As well as providing access to individual titles the BHL also collates collections, such as:

Rarest of the Rare

The University of Cambridge now has trial access to The Nation Digital Archive on the EBSCOhost platform.

Enjoy an unparalleled history of The Nation featuring thousands of historic articles, letters and editorials dating back to 1865.

The full page views are available as PDF downloads.

Access is enabled until 30th April 2019.  Please send us your feedback via the online form here.

The University of Cambridge now has an institution-wide licence to the Times Higher Education (THE).

Staff and students keen to keep up to date with developments within the higher education sector can do so courtesy of a new institutional subscription to the Times Higher Education (THE) magazine.

The University has signed a three-year deal that enables staff and students to read the magazine online. Faculties and departments are therefore requested to cancel any subscriptions that they may have with the THE to reduce overall spend across the institution.

This licence allows all staff and students to access a range of editorial services, including:

Individuals can find details on how to create their account on the University Library’s THE page here:

They can also access this subscription off-campus and overseas, and THE can be accessed via the app on iOS, Android, and Kindle Fire devices.

Staff and students may also be interested to know that the University has an institutional subscription to the online version of the Financial Times. More information can be found on the University Library’s webpages here:

“The Journal of Pacific Archaeology aims to publish promptly on research in the archaeology of the islands and continental margins of the Pacific Ocean, both northern and southern hemispheres. Contributions on relevant aspects of related subjects such as biological anthropology, historical linguistics, environmental sciences, material culture, ethnography, and history are also invited. The Journal of Pacific Archaeology is an international peer-reviewed journal that is published twice a year, for the New Zealand Archaeological Association, by the University of Otago. It supercedes the New Zealand Journal of Archaeology, published 1979-2008.”

Now available to the University of Cambridge electronically from volume 1 (2010) to present.

Image credit: ‘The Return of Helios’ by Peter Kurdulija on Flickr – https://flic.kr/p/678Y6N

” KNOW: A Journal on the Formation of Knowledge investigates the construction, transmission, and contestation of forms of knowledge from antiquity to today. What people know and how they claim to know it, the very choice of things as objects of knowledge, are products of history, politics, and culture.

The flagship publication of the Stevanovich Institute on the Formation of Knowledge, KNOW uncovers and explicates this vast terrain in both past and present.”

Now available to the University of Cambridge electronically from volume 1 (2017) to present.

Access Know via the Journal Search or from the iDiscover record.

The University of Cambridge has trial access to the digital archive Immigrations, Migrations and Refugees: Global Perspectives, 1941-1996 here:

Please send your feedback on this trial using this online form.  Thank you.

From the beginning of World War II through the end of the twentieth century, the mass movement of peoples caused problems for governments around the world. Responses to legal immigration, illegal immigration, and refugee crises varied greatly, often depending on a country’s proximity to the crisis. These problems and responses helped shape the world we live in.

What is the context of this database?

This database contains news reports, television transcripts, and radio transcripts from around the world. The reports were chosen by a U.S. government agency called the Foreign Broadcast Information Service (FBIS)—which became part of the Central Intelligence Agency (CIA) in 1947–to be disseminated among government officials and decision makers. The reports begin with the refugee flows during World War II and cover all crises through 1996. The reports come from many nations and, where necessary, were translated into English. No U.S. newspapers or broadcasts are included in this database.

” Visual Arts Research provides a forum for historical, critical, cultural, psychological, educational and conceptual research in visual arts and aesthetic education. Unusual in its length and breadth, VAR typically publishes 9-12 scholarly papers per issue and remains committed to its original mission to provide a venue for both longstanding research questions and traditions alongside emerging interests and methodologies.”

Now available to the University of Cambridge electronically from volume 34 (2008) to present. Volume 8 (1982) to volume 38 (2012) are available via the JSTOR Arts and Sciences VIII archive.

Access Visual Arts Research via the Journal Search or from the iDiscover record.